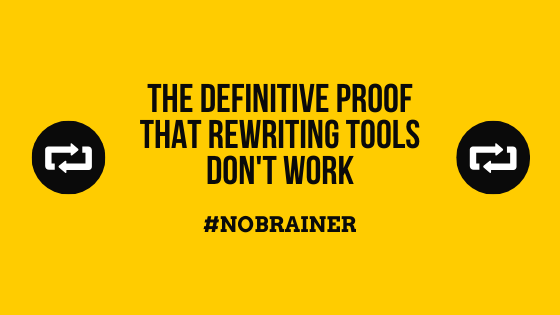 Rewriting tools, which are also known as article spinners, article rewriters, and paraphrasing tools, are designed to rewrite existing articles and website content so that it is completely unique.

A simple search for “rewriting tools” renders an estimated 17,900,000 results.

Granted, not all of these will be article spinners. However, we’re left with zero doubt that there are tons of rewriting tools on the market.

This, in itself, should ring alarm bells.

Software that is worth its salt, i.e., achieves the job it claims to achieve, isn’t readily available. The development costs are enormous, and it takes big companies years and years of development to refine tools of that nature.

We know language is complex.

Even those companies that do invest wads of cash in the development of language-based software and applications find it very, very difficult to produce tools that are accurate.

One prime example of such an organization is Google.

Google is one of the biggest companies in the world. It has plenty of cash to spare. However, we all know that you couldn’t rely on the Google Translate app alone to communicate with locals in a foreign country.

It’s great. But Google would be the first to admit that it simply isn’t 100% reliable. And that’s after a huge investment.

What the situation with Google Translate tells us—and remember that this is highly sophisticated software that was only possible through millions of investment—is that a machine can produce a high-level translation of a given text that may communicate the general meaning. However, due to the high risk of mismatches, it will not provide anything that is specific and reliable.

And it is the same high risk of mismatches that means you can’t rely on the inputs of rewriting tools and article spinners.

The organizations that are churning out language spinning software don’t have access to the level of cash that is available to Google. As such, the offerings they produce are nowhere near sophisticated enough to process the complexities of the English language and paraphrase language effectively.

But don’t just take our word for it. Let’s take a look at what rewriting tools and article spinners do in more depth.

What are rewriting tools?

Rewriting tools, software, and applications typically offer to rewrite text so it is entirely unique. This involves completely removing all plagiarism.

They are available in a variety of forms.

Some are subscription-based packages, while others are available online completely free of charge.

Rewriting tools vary in levels of sophistication. Some require the users to input potential synonyms for the words they want to change (why bother when you can use the thesaurus in Word much more efficiently?), while others claim to be AI-based applications that can perform the function of the human brain.

How do rewriting tools work?

Again, the tasks performed vary in levels of sophistication, but article rewriters operate by replacing words and well-known phrases with a different word or phrase.  Take a look at our guide to how to rewrite articles to learn more.

Note, in the sentence above, I used the word different, not equivalent.

And this is where the problem lies.

The providers of rewriting software claim the tool churns out a new set of text that carries the same meaning as the original.

As we will see later, this is typically NOT the case.

There are currently three fundamental issues with rewriting software, regardless of the underlying technologies.

Let’s look at some incidences of these issues in action.

For the purposes of this article, we will not refer to the names of the companies or applications that were used for these examples; we’re not in the business of flinging mud or damaging reputations.

Our objective here is to show you what the problems are with rewriting tools so you can then make an informed decision as to whether they suit your needs.

You can always try a few sample texts for yourself.

The text we used for this case study was as follows:

What the situation with Google Translate tells us—and remember that this is highly sophisticated software that was only possible through millions of investment—is that a machine can produce a high-level translation of a given text that may communicate the general meaning. However, due to the high risk of mismatches, it will not produce anything that is specific and reliable.

This example text was run through the application offered by the first company that appeared in a search for a “free rewriting tool.”

What the situation with Google Translate tells us—and bear in mind that this is often be} extremely subtle code that was solely potential through uncountable investment—is that a machine can turn out a high-level translation of a given text that will communicate the overall which means. However, thanks to the high risk of mismatches, it’ll not turn out something that’s specific and reliable.

Using this tool would be a complete waste of time and effort. In addition to being presented with text that is meaningless in some cases and inaccurate in others, the changes are not sufficient to pass a plagiarism test or search engine requirement for unique content.

For this example, we were interested in observing the output of a tool that claimed to be based on artificial intelligence comparable to the human mind. As such, we ran the sample text through the first rewriting application that appeared on a Google search for the phrase “AI rewriting tool.”

What the situation with Google Translate tells us — and remember this is highly sophisticated software that has been possible only through millions of investments— is that a machine can produce a high-level translation of a given text that can convey the general meaning. However it will not produce anything that is specific and reliable due to the high risk of mismatches.

For this example, we searched for a tool that was available for a fee. The assumption here was that software that users need to pay for to access would produce better results. Here’s what happened.

What Google Translate tells us—and keep in mind that that is highly sophisticated software program that was simplest feasible through thousands and thousands of investment—is that a machine can produce a high-level translation of a given text that may talk the general meaning. However, due to the high hazard of mismatches, it will no longer produce anything that is particular and reliable.

Despite the producer’s claims, even the most expensive rewriting tool could not produce flawless spun content. In fact, it couldn’t even produce unique content, let alone text that is grammatically sound and cohesive.

So you may be wondering if it is even possible to rewrite text so that it is unique, grammatically sound, and conveys a comparable meaning to the source file.

But for that, you need a human brain.

For the final case, we asked a human rewriter to paraphrase our text. Here’s what we ended up with:

The case of Google Translate provides a prime example of the limitations of language processing software. Despite the significant investment that has been made in this highly complex tool, it is only capable of generating a translation that conveys the high-level meaning of a phrase or paragraph. Due to the significant risk of translation and word-mismatch errors, it is unable to produce outputs that users can 100% rely on.

Computers are no rival for a human when it comes to rewriting text.

Here’s the key thing you need to know here: These rewriting tools may serve a purpose for some people. However, they shouldn’t—and can’t—be relied upon.

Yes, some spinners and rewriting tools are better than others.

As such, if you really insist on using them, you’ll need to do some research to find out which apps produce the most reliable results. In addition to taking up valuable time, this will be very difficult if you’re not a native English speaker or don’t have an excellent grasp of grammar.

However, if you have plenty of time to edit and review the generated text, they may work for you.

The better option is to rewrite the text yourself. In the majority of cases, it will actually be quicker.

If you’re looking for a really professional job, use a human rewriting service. Human rewriters can give you a fresh perspective by combining several pieces of content. This will allow you to create a new article or blog post that isn’t merely the plagiarized work of others.

You’ll get great results and produce articles specifically tailored to your brand that actually convert customers as opposed to meaningless regurgitated spun content that turns visitors to your website off.