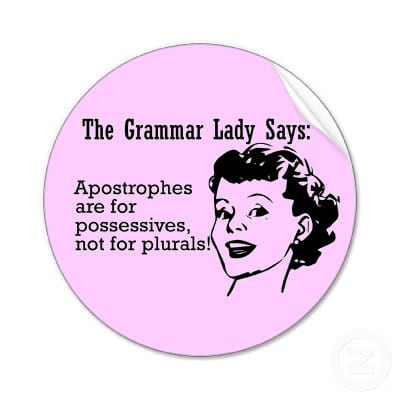 There are a number of common English errors that our proofreaders come across time and time again and, given that Vappingo’s mission is to make written communications the norm, we feel that it is our duty to help our customers with their written English. Hopefully, this post will help a few of you to learn from your mistakes and develop your own proofreading skills. If nothing else, they most certainly highlight the importance of proofreading and editing before it is published.

Me, Myself and I

Our proofreaders often complain about how commonly the word “myself” is misused. Here’s a typical sentence:

If you need any help with your homework, see your mentor or myself. We are more than happy to help.

Can you spot a problem with it? There is a big problem; it’s completely incorrect. If you’re not convinced, try removing the mentor from the situation:

If you need any help with your homework, ask myself. I am more than happy to help.

In a lot of the documents that are submitted for our proofreading services many people mistakenly think that the word “myself” acts as an intensified version of the word “me.” Let’s get one thing straight; it doesn’t. “I” is the “doer” and “me” is the “done to.” For example:

I ran into the car because I wasn’t looking properly when I ran across the road.

The car backed out of the drive straight into me. The driver wasn’t looking.

You should really only ever use the word “myself” when the word “I” has already been used in a sentence. For example:

I got bored of waiting for you to get home from work so I washed the car myself.

I am really disappointed that you didn’t ask me first. I was saving the rest of the chocolate for myself.

When you should use an apostrophe

If there’s one area of punctuation that appears to cause people the most difficulty, it’s apostrophes. Here are some of the basic rules that our proofreaders always apply to the use of apostrophes.
1. Use apostrophes with contractions. Place the apostrophe in the exact place where a letter has been removed, e.g.:

2. Use an apostrophe to denote possession or ownership of something. Place the apostrophe before the s to show singular possession.

Even if the person’s name ends with s already, apostrophe s can still be added, or an apostrophe without the s is admissible.

If you wish to show plural possession or ownership, make the noun plural first and then add the apostrophe at the end:

When you should not use an apostrophe

1. Don’t use an apostrophe to denote the plural of a name.

DO use an apostrophe in “its” if the word acts as a contraction of “it is”:

It’s in your best interests to revise for your exam if you want to get that job you have applied for.

DON’T use an apostrophe in “its” if the word is being used as a possessive pronoun:

The spaceship continued on its course at breakneck speed and the passengers hung on for dear life.

For more rules about apostrophes and how to use them, see our free guide to apostrophes: Guide to Punctuation.

Our proofreaders often correct mistakes where the word “which” has been used instead of “that” and vice versa. There is one simple method of understanding when to use “which” and when to use “that”:

Vappingo is the online proofreading service that always delivers on time.

Vappingo is available 24/7, which is great if you have a deadline to meet.

For more commonly confused words, such as “effect” versus “affect”, “been” versus “gone” and “by” versus “until”, please see our guide to common mistakes in English.

Who is going to walk the dog this evening? James is going to be at a meeting until late and I have done it every evening this week.

The dog will be walked by whom this evening? James is going to be at a meeting until late and I have done it every evening this week.

This English error is extremely common, and it isn’t just ESL students and English language learners that get it wrong. An ellipsis is a punctuation mark that is used to denote that some text has been omitted from a sentence. Alternatively, it can be used to indicate a pause. The ellipsis should consist of three evenly spaced dots (periods) with spaces between the ellipsis and surrounding letters or other marks. This is where many people go wrong. It is not uncommon for our proofreaders to correct ellipsis punctuation marks that have four, five, ten, twenty or even thirty spaced dots!

For more details on the correct use of an ellipsis, please see our post on why Mariah Carey’s T-shirt upset Vappingo’s founder: Ellipsis

This is another extremely common English error that drives our proofreaders insane. The past participle term “would have” is grammatically incorrect and should never be used. Here are some examples of it in action:

These examples refer to past unreal conditionals. That is, cases where things would have been different had a certain condition been met. To be grammatically correct they should have been written as follows:

If I had been there things would have been very different and we wouldn’t have lost the competition.

If only you had seen what he was wearing you would have died laughing.

My guess is that many people won’t be able to decipher the above sentence, and it’s precisely for this reason that abbreviations and text speak should be avoided in formal communications at all costs. To the majority of people, it is unintelligible gibberish and writing like this is the quickest possible way to:

For those who need the translation:

If you think you may make some of these mistakes in your writing and feel that you could benefit from a professional proofreader’s input, then check out our student proofreading services.