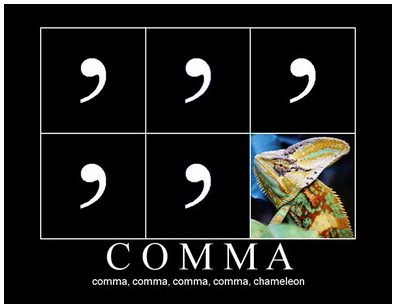 Many people find it difficult to understand when to use commas. Comma rules appear to be extremely complicated, and it is very easy to make mistakes when using them. In this article, we present a comprehensive list of 15 comma rules that you should know in order to master the use of commas in your writing.

Use a comma to indicate a short pause in a sentence.

If you would like the reader to briefly pause between two parts of a sentence, you should separate them with a comma. For example:

When the archaeologist finally found the location of the hidden treasure, he was dismayed to find that someone had already beaten him to it.

Never use a comma to separate the subject from the predicate, unless there is a danger that the meaning may become obscured if you do not.

Starting an ice cream factory when he knew he was addicted to ice cream [x] was quite possibly one of the most stupid things that the ogre had ever done.

Although, on initial inspection, it looks like the sentence above needs a comma after the words ice cream, it does not because the opening segment, “Starting an ice cream factory when he knew he was addicted to ice cream” is really the subject of the sentence and it should not be separated from the predicate, the action element of the sentence.

Exceptions to the rule:
If the subject is long, a comma may be placed after it.

To say that he endured without a murmur the misfortune that now came upon him, is to say only what his previous life would have led us to expect.

When the subject consists of several parts, e.g., of several nouns, a comma should be placed after the last part:

Time, money, and friends, is all you need to get through life.

Dogs, cats, and birds, the house was full of animals.

Exceptions to the rule:
If the last noun summarizes the previous nouns, no comma should be placed after it:

Dogs, cats, birds, animals were taking over the house.

Whatever his reasons for taking over the ice cream factory, it was clear that the ogre was going to be putting on weight.

In this example, the clause “whatever his reasons for taking over the ice cream factory” is a dependent clause because it doesn’t make complete sense on its own. It should, therefore, be separated from the rest of the sentence through the use of a comma.

Use a comma to set off expressions that interrupt sentence flow. Words that are introduced into a sentence to disrupt the flow should be separated from the rest of the sentence via the use of commas.

To tell the truth, it was a really bad idea for the ogre to purchase the ice cream factory.

As such, in my opinion, the ogre really needs to think through his diet.

Canberra is the capital of Australia; London, of England; Beijing, of China.

Just how long it would take to dig the hole, no one could accurately estimate.

At the end of the day, the decision is yours.

This time tomorrow, we will be married.

This time tomorrow we will be married.

Use commas to introduce or interrupt direct quotations that are shorter than three lines:

Use a comma to separate a question from a statement:

You can help me, can’t you?

Use commas to surround qualifications or official titles when they are used with names. Commas are no longer required around the words Jr. and Sr. and they should never be used to set off II, III, and so forth.

Use a comma to separate the day of the month from the year.

If any part of the date is not present, the comma can be omitted.

Use a comma to separate the name of a city from the state within which it is located. However, if you use the two-letter capitalized form of a state in a document, you do not need to place a comma after the state.

I grew up in Tampa, Florida.

I lived in Brooklyn, NY for six years.

Use a comma when an -ly adjective is used with other adjectives. In order to understand whether or not the –ly word is an adjective, place it with the noun to test if it can be used alone with the noun. If it can, use a comma.

Fido was a lovely, vibrant dog.

She wore a strongly scented perfume.

The word strongly is not an adjective because it cannot be used alone with the word perfume; therefore, there is no requirement to use a comma between the words strongly and scented.

Use a comma to separate two or more adjectives if they appear BEFORE a noun and if the word order of the two could be reversed and the word “and” could be substituted for the comma.

The tired, demoralized athlete stopped running and dropped out of the race.

The tired and demoralized athlete stopped running and dropped out of the race.

Note: Do not put a comma between the last adjective and the noun.

The lazy, overweight [x] dog refused to go for a walk. (Microsoft Word does not catch this.)

Here we have tried to provide a good overview of some of the most important rules that govern the use of a comma. However, no blog post could possibly provide a full and complete list of rules regarding commas, and any that attempted to do so would be extremely long and probably very dull. If you need basic information on how to use commas or have very complex and specific questions, you should refer to a manual of editorial style and usage or a grammar handbook.
It is important to note, if you are having problems with understanding comma rules, it is best not to rely entirely on a computer grammar program to find your mistakes. The variable rules and conventions regarding commas cannot be reduced to a set of rules that a computer program is capable of understanding and applying. It is, therefore, better to rely on a professional proofreader.

3 thoughts on “When to Use Commas: 15 Comma Rules Everyone Should Know”