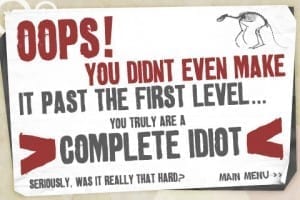 The word ironic is one of the most abused words in the English language. Isn’t it ironic? Actually, no, you can learn why here: 10 words that you think you know the meaning of, but probably don’t.

One story that perfectly illustrates the true meaning of the word irony was presented during the 1994 annual Darwin Awards ceremony. The Darwin Awards commemorate individuals whose foolish and idiotic behavior leads to their own death and simultaneously protects the gene pool of the human race.

Back in 1994 the president of the event, Don Harper Mills, absolutely astounded his audience when he outlined the legal complications that had surrounded one individual’s bizarre and sudden exit from this world. Ronald Opus had jumped from the top of a ten-story building in a desperate attempt to commit suicide. Now, while this in itself may not sound particularly peculiar or out of the ordinary, it was what happened after he jumped that is of real interest.

As Opus fell past the ninth floor, a bullet flew through an open window and hit him in the chest, leading to his instant death. Interestingly, had he not been shot in this manner, Opus’ suicide attempt would actually have been a complete failure. As it transpired, a safety net had been erected at the eighth floor to protect a group of workers who were cleaning windows. Were the legal authorities now dealing with suicide or homicide? The answer to that question lies in who fired the shotgun from the ninth floor window.

The room from which the gun was fired belonged to an elderly man and his wife. At the time that the trigger had been pulled, the couple had been in the middle of a serious argument, and the old man had threatened to shoot his spouse. Luckily for her, when he did fire the weapon his shot completely misfired, traveled through the open window and struck Opus as he was falling towards the safety net below. So now the old man was facing the serious charge of murder. However, the investigators learned that it was his long-standing habit to threaten his wife with an unloaded gun, and the old man was adamant that he had not known that the gun was loaded. As such, it seemed he had no intention of murdering his wife, and Opus’ death may have been an accident.

So who had loaded the shotgun? The continuing investigation turned up a witness who had observed the old couple’s son loading the shotgun approximately six weeks before the fatal incident. Further investigations revealed that the old man and his wife had cut off their son’s financial support and the son, knowing that his father had a habit of using the shotgun to threaten his mother, had loaded the gun, hoping that his father would shoot his mother for him. At this point, the case became a murder inquiry, and the authorities sought out the couple’s son to prosecute him for the death of Ronald Opus.

At this point, the story takes another bizarre twist, a twist that perfectly illustrates the real definition of the word “irony.” Further investigation into the odd case revealed that the couple’s son was, in fact, Ronald Opus himself. He had become increasingly despondent over his failure to engineer his mother’s death and had chosen to end his own life by jumping from the building. He was killed by his own father who had fired the gun that Ronald had loaded in an attempt to kill his mother.

The case was finally closed as a suicide.

Is the story true? It is a great illustration of the true meaning of the word irony.

Want to make sure you don’t make mistakes with your vocabulary in important documents? Then you’ve got to try Vappingo!