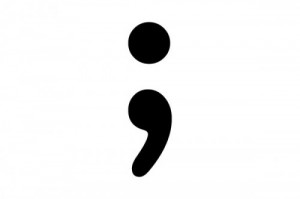 Knowing when to use a semi-colon is something that does not come easily to many writers, and many people are confused as to when a comma or colon should be used in favor of a semi-colon, and vice versa. However, it really is worth taking the time to learn about this punctuation mark and when it should be used, as the correct use of it in your writing can really make a difference to the power of your communication. There are basically three situations in which you should use a semi-colon:

The giant was not very happy.

The naughty gremlin licked the giant’s ear, the giant was not very happy.

This is INCORRECT and causes a comma splice.

If you want to connect the two independent clauses together you can use a semi-colon:

The naughty gremlin licked the giant’s ear; the giant was not very happy.

This unites the two similar ideas and eliminates the pause that would occur between them if you had used a full stop to separate the two clauses. Basically, the semi-colon serves the purpose of linking the two sentences so that the reader knows that they are connected to one another. Had he or she opted to use a period between the two clauses, the reader would have known that the gremlin licked the giant’s ear and that the giant wasn’t very happy but would not necessarily have known that the giant was unhappy BECAUSE the gremlin licked his ear.

When clauses are connected by a conjunctive adverb.

When a conjunctive adverb is used to connect two independent clauses in a sentence, it should be preceded by a semi-colon and followed by a comma. Let’s look at an example:

The hairy baboon was far too fat to fit in the cage.

He could not travel to the new zoo.

Conjunctive adverb used to link the sentence with semi-colon used to connect the ideas:

The hairy baboon was far too fat to fit in the cage; therefore, he could not travel to the new zoo.

The semi-colon is extremely useful when presenting long lists that already include commas:

The hairy baboon couldn’t decide what to eat next: Oreos, which he likes to dip in his coffee; peanut butter, which he thinks tastes amazing on toast; strawberries and custard, which is sickly sweet; or a nice big bowl of Jell-o, which will give him the sugar boost he needs to tackle the ironing.

Knowing when to use a semi-colon can be very rewarding and can add a great deal of power to your writing. Remember that practice makes perfect, so keep trying and, if you’re ever confused, err on the side of caution and separate sentences using a period (full stop), as opposed to a comma.
Do you need help with your punctuation? Take a look at our guide to the most common punctuation marks.

3 thoughts on “When to Use a Semi-Colon”