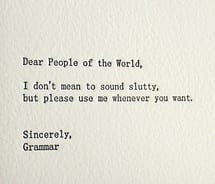 Have you ever actually stopped to consider the question “What is grammar?”

If you take the time to think carefully about it, you may actually find that you experience problems pinning down an interpretation of this complex linguistic field. That is exactly why it causes so many people so much confusion and results in grammatical mistakes.

In addressing the question of “what is grammar”, the Oxford Dictionary defines grammar as:

The way in which words are put together to form proper sentences.

Although that is a pretty good description of grammar, the truth is, grammar is much, much more than that.

To understand what grammar is, it is useful to consider what our lives would be like without it.

What is grammar? A life without grammar

When complicating the question of what is grammar, it’s useful to go back to the dawn of time when cavemen first started to communicate with each other using language. It is highly probable that they initially started to invent words to describe objects and phenomena around them. Perhaps they used words such as “woman”, “man”, “tree”, “cave”, “fire”, “hot”, “beast”, “hunt”, etc. They may have found these words extremely useful for communicating with one another, but it wouldn’t be long until the lack of grammar became a problem, especially when they started to combine words to increase the level at which they could communicate.

Let’s say a man tried to warn his wife that the fire was hot:

Did he warn the big woman that the fire was hot? Or did he warn the woman that the big fire was hot?
Depending upon the way in which she interpreted his warning, he may just have found himself being hit around the head with a heavy stick. You see, one of the problems with words without grammar, is that they can’t really handle complicated situations very well. Placing a string of words together without appropriate consideration of syntax, phonetics, morphology, and semantics entails that the meaning of these words can be open to interpretation and easily confused.

For example, if a caveman where to shout:

Is he warning the woman that there is a beast nearby? Or is he calling the woman a beast? Is the woman about to be attacked by a beast? Or has he just slain a beast and is declaring his success?

The problem is that words alone cannot convey the relationship between objects and actions. If the woman was confused as to what the caveman was telling her, how should she reply?

Is she asking him whether there is a beast nearby? Or is she questioning whether or not he called her a beast? Is she asking if she is about to be attacked by a beast? Or is she confirming that he just slain a beast and is declaring his success?

…you get the picture. We now understand why we need grammar. But what is grammar?

What is grammar? Understanding grammar

Grammar is a linguistic tool that determines the rules for presenting sentences correctly. It involves a number of related subfields including syntax, phonetics, morphology, and semantics. However, what is grammar to one person, may well be something completely different to someone else. There are two views of grammar: descriptive grammar and prescriptive grammar.

Descriptive grammar is generally preferred by linguists and people who study language, and it involves scrutinizing words and sentences based on how they are actually used in practice by the people who speak that language. Linguists who are interested in descriptive grammar study how people use it in their everyday lives and attempt to identify a set of rules that govern such usage. They are not particularly concerned with the whether an individual’s grammar usage is correct or not, they are more interested in the realities of its usage. For example, in many speech communities, a sentence such as, “What did you do that for?” is commonly spoken and is considered to constitute accurate language. However, an individual who followed a prescriptive approach to grammar would argue that the sentence is grammatically incorrect because it ends with a preposition. However, a descriptive grammarian wouldn’t be concerned about that; they would simply be interested in the fact that many people in society do end a sentence with a preposition.

Prescriptive grammar is very much concerned with the rules of grammar as recorded by authoritative sources, such as academic institutions and various areas of society. An individual who was interested in adhering to prescriptive grammar conventions would insist that standardized rules are followed in all written communications. You will generally find that teachers follow a prescriptive approach and that, in the main, so do editors and proofreaders.

Whether you opt for a prescriptive or a descriptive approach to grammar will very much depend on the purposes of your communication.

It is clear that when it comes to contemplating the question, “what is grammar?”, the answer is much more complicated than would first appear. While grammar is basically a set of rules that govern a language, the interpretation of those rules can be highly subjective and complicated. However, what is crucial, is the acceptance of the fact that grammar is imperative to communicating accurately, and ensuring that we are understood. The need to use a grammatical approach that meets the communication needs of your audience and is appropriate to the vehicle of communication cannot be over-emphasized.

2 thoughts on “What is Grammar and Why is It Important?”