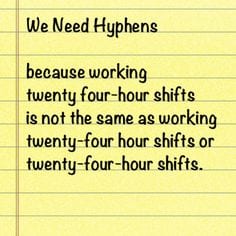 Knowing when to hyphenate numbers is important because the correct use of the hyphen helps your reader to understand which numbers are part of a given adjective and avoids any ambiguity.

Let’s look at the example on the left.

As you can see, where you place the hyphen in the number can make a significant difference to the meaning of the sentence.

The bingo caller pulled a ball from the machine and announced: “Two little ducks, twenty-two.”

There were over one hundred people in line for the concert.

A total of two hundred and fifty-five people participated in the survey.

A one hundred million dollar profit is not such a big deal when you made two hundred and eighty-six million dollars the year before.

I was shocked to see that there were three hundred chickens living in the barn.

If you want some help proofreading your important documents, check out Vappingo.

2 thoughts on “When to Hyphenate Numbers”