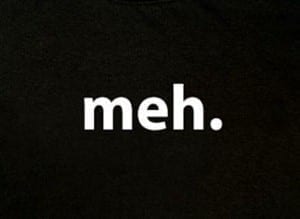 The English language is under serious threat from people who like to use made-up words that don’t really exist or who use words they don’t know the real meaning of.
The following seven words are completely made-up items of vocabulary that have crept into the English language and are misused on a very regular basis.

You may think it means “regardless.” It is a non-standard word, and you should avoid using it.

President Bush thinks it means to mistakenly underestimate something or someone: “They misunderestimated me.”

President Bush is wrong. It doesn’t mean a thing.

Sarah Palin is a massive fan of this made-up word, and she has used it several times in interviews and tweets. Either she likes the word so much that she is trying to make it acceptable, or she doesn’t actually know that it isn’t a real word. We’re putting our money on the latter.

“Supposably” is a word that Americans often confuse with the word “supposedly.” “Supposably” can be used only when the meaning is “capable of being supposed,” and then only in the U.S.

“Author” is a noun that identifies the individual who wrote a document or book, it should not be used as a verb to describe the action of writing.

“A lot” consists of two separate words. They should not be condensed down into one word in any circumstances.

There’s no such word as “alright.” It should be two words: “all right.” As grammarian Bill Walsh puts it in his book Lapsing Into a Comma, “We word nerds have known since second grade that alright is not all right.”

What made-up words do you hear on a regular basis? Leave a comment and tell us all about them.

Need some help perfecting your written English? Check out our rewriting services.

In addition to made-up words being a major problem, there are also tons of people out there who use real words completely incorrectly. Are you one of them? Take a look at our guide to words you may think you know the meaning of, but probably don’t.