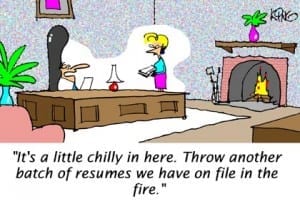 Understanding what not to write on a resume requires analyzing if what you are saying actually makes sense. The majority of people write resumes that are full of stock phrases and high-level claims that mean absolutely nothing to the average recruiter. If you want your resume to be read and, more importantly, you’re looking for an interview, you need to make sure that it stands out from the rest and steers clearly away from empty clichés and meaningless jargon. It does happen: take a look at these funny cover letters.

Here’s my take on what not to write on a resume:

Example: “I am a great team player and have worked with people from a variety of different backgrounds.”

At the top of my list of what not to write on a resume are the words “team player.” I’m sure that every single person who has submitted a resume for the job advertised has claimed somewhere in their resume that they are a team player. Why? Because, unless you’re applying for a job as a lighthouse operator, you will find that most of the candidates have worked in teams and believe they’re good at it. So how can you stand out from the rest? The key phrase here is “show, don’t tell.” Don’t say you can do something, give an example of where you actually did it and what the results were. Employers are not stupid; they do have powers of deduction and will be capable of deducing what your skills are from the examples you have provided.

Example: “I am a hard worker and give every task my all.”

Great, you’re a hard worker. But let’s face it, no one is likely to declare themselves a slacker on their resume are they? So, yet again, everyone works hard, and those that don’t are likely to lie about it and say they do work hard; you have just wasted a line of your resume telling the recruiter that you are exactly the same as every other applicant. This is no good when your objective is to stand out. Again, don’t tell the recruiter that you are a hard worker, describe an occasion that demonstrates it.

Better: “Created a new business controls system from scratch within a 12-month period.” (Sounds like hard work to me).

So, you were responsible for something, but did you actually do it? The words “responsible for” are very uninspiring, and they conjure up images of a second-rate employee showing up for work on a daily basis and mechanically fulfilling his or her “responsibilities.” Being responsible for something doesn’t describe what you did, it is a passive term that describes something that happened to you. Ditch it and replace it with something much more powerful and decisive. Always use quantitative figures to back up your assertions.

Better: “Wrote seven operational procedures that were approved by senior management and subsequently used by over 10,000 employees.”

Also avoid: Held accountability, tasked with, worked as, assisted with.

Yes. So it should be.

Yes. So they should be.

Example: “Have experience with PHP programming.”

Another favorite on my list of what not to write on a resume is a vague reference to “experience.” Did you bump into a PHP programmer on the street? Experience is very subjective; you can have “experience” in something after you’ve done it once and it is hardly a distinct, measurable achievement. Don’t just say that you have experience in something, give specific facts that support your assertions.

Example: I have great communication skills.

Your written communication skills should be self-evident within the resume itself. As for spoken communication skills, unless you are a baboon, it should go without saying that they are good too. When it comes to knowing what not to write on a resume, it is important that you don’t waste space making meaningless claims. Instead, give details that instill confidence in the recruiter.

Better: “Created comprehensive customer help documentation that reduced calls to the help center by 25% over a six-month period.”

Isn’t your resume an overview of your track record? Therefore, it’s the recruiter’s role to decide whether it’s proven or not. Again, you need to let your achievements speak for themselves, quantify the impact you made with measurable and specific details.

Are there any terms or phrases that you think should feature on the list of what not to write on a resume? Leave a comment and let us know.
Now you have your resume in the bag, you should turn your attention to your cover letter. The average recruiter receives 80 job applications a day. What are you doing to stand out from the crowd? Make a difference with our cover letter editing services.

2 thoughts on “What Not to Write on a Resume: 8 Statements You Should Avoid”