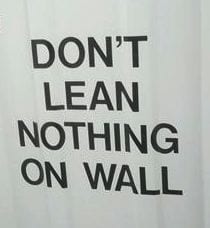 What is a double negative and do you need to care?

The quick answer to this is yes. Some people believe that there is a place for them in written English and others argue that they are non-standard and should not be used. Regardless of your opinion, you need to be able to identify them and understand the impact that their use may have on the meaning of your sentence.

What is a double negative?

A double negative occurs when a clause contains two negative words that serve to cancel one another out. They are generally acceptable in informal language as a means of intensifying a negative meaning. However, it is important to recognize that their usage can cause confusion for a reader and it is, therefore, advisable that they are completely avoided in formal written English.

One of the main problems associated with double negatives is that when you use two negative words in a single sentence they form a positive. This entails that people who mistakenly use a double negative in a clause actually say the opposite of what they intended to say. For example, if you were to write, “I don’t have no problems,” the words don’t and no would cancel each other out and you would effectively be saying: “I have money.”

Are there situations when it is okay to use a double negative?

Yes. Occasionally, double negatives can be useful when a writer wants to emphasize a negative quality. For example, the clause, “I cannot disagree with you” is a double negative—”I agree with you” would be the positive descriptor—however, using the negative form places an emphasis on the fact that, while there is no basis on which to disagree, the agreement is tentative. Similar clauses are, “I won’t ask you not to do that,” and “I am not unhappy,” “I’m not sure that I didn’t say that,” and “I don’t dislike him.”

How to avoid using double negatives

1) It sounds obvious, but if you are unsure whether it is suitable to use a double negative or not, just avoid using two negative words in the same sentence.

2) Be careful with your use of the word but. The word but has a negative meaning and if it is used in the same clause as another negative, a double negative situation will occur.

Incorrect: We have no doubt but that John will win the competition.

Correct: We have no doubt that John will win the competition.

3) Words like barely, hardly, and scarcely have negative connotations and should not be used with another negative as they will create a double negative.

Incorrect: He couldn’t hardly walk after a full afternoon gardening.

Correct: He could hardly walk after a full afternoon gardening.