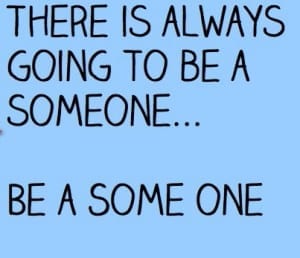 Someone or some one? Are they actually different from one another and does the term “some one” actually exist?

In this article, we take a look at these commonly confused words and reveal that, despite what many people say, there is such a term as “some one.”

Someone or some one?

“Someone” refers to an unspecified group of people. It should be used when you want to refer to a person, but you do not have a preference to whom you refer: Will someone answer the phone, please?

“Someone has taken my lunch out of the fridge.”

“There must be someone who is able to help me.”

“I’m sure someone, somewhere, will marry me.”

“Some one” refers to an unspecified member of a group of items or a person that is being selected for individual attention:

“I know that some one in my team has stolen my lunch but I don’t know who.”

Quite often when using “some one” the word “some” can be removed without causing a loss of clarity:

“I know that one of the members of my team has stolen my lunch but I don’t know who.”

However, there are valid cases for the use of “some one.” In Jane Austin’s Pride and Prejudice, for example, you find the paragraph:

However little known the feelings or views of such a man may be on his first entering a neighbourhood (sic), this truth is so well fixed in the minds of the surrounding families, that he is considered the rightful property of some one or other of their daughters.

Here she means, “some one or other” of the daughters. The author is saying that one of the daughters is being selected for special attention; we just don’t know which one.

Someone or some one? Choose carefully!

If you’re still unsure and would benefit from the help of a professional editor to check your written English, check out our proofreading services today.

2 thoughts on “Someone or Some One: What’s the Difference?”